In the arcades, no game genre was more hungry for coins than the beat-’em-up Konami’s Teenage Mutant Ninja Turtles series, Capcom’s Final Fight and Sega’s Streets of Rage and Golden Axe series. They all hold a special place in our hearts. Where one-on-one fighting games promoted competition, brawlers were perfect for co-operative play. So much so that it was essential to have a buddy or three to make the coins count, provide moral support and swap with when playing fingers get sore.

Today, brawlers have all but faded into the past, but Streets of Rage makes a comeback with a fourth iteration, and it does not hold back.

Streets of Rage 4 has a fairly generic ’80s street gang plot, set 10 years after the the last game. A new evil has risen, as the children of the earlier game’s antagonist Mr X — aptly named the Y twins — have unleashed terror. Original protagonists Axel Stone and Blaze Fielding return, joined by Cherry Hunter and the cybernetic Floyd Iraia. Joining these protagonists are Adam Hunter and a host of classic versions of the characters, including some returning ones, that can be unlocked as you progress through the game. Screenshot of Axel Stone in Streets Of Rage 4

Dotemu has not changed the formula in any way. Streets of Rage 4 is still a classic ‘belt-fed’ game, as it was called in Japan, which is a side-scrolling background you and your companions walk and fight through. You have freedom to move around the plane of the street, as you sidestep, punch and unleash special moves. Looks- and gameplay-wise, the game embodies the classic beat-’em-up perfectly — from sprite movements to the multiple lives, to the neon-drenched environments. But that is where the similarities end, and only once you actually play it, you will notice the new things. Screenshot of a fight scene in Streets Of Rage 4

Special moves literally give you life, as executing a successful Blitz Move will gain you some life. The health bar dips surprisingly fast and it is a neat gameplay tweak. While the move sets are limited, the game hides away Star Moves, which are area-effect power attacks that you get by finding star pieces hidden throughout levels. Rather than earning experience, the game uses an arcade-style point system to gain extra lives and unlock characters, a great reward mechanism that keeps fighting to unlock more support.

Using Star Moves at the right time, keeping a close eye on recovering your health and using your buddies to chain moves with is key; you can play Streets of Rage 4 solo, but the game encourages co-operative play. It is so much fun playing goon tennis by lobbing baddies into friends’ power moves, using the environment to hurl foes and watching them bounce off into their friends like a pile of bowling pins. While the fun is still there, some of the problems do get inherited; it is hard to telegraph attacks diagonally, and the slow place may put people off, especially those used to faster games. 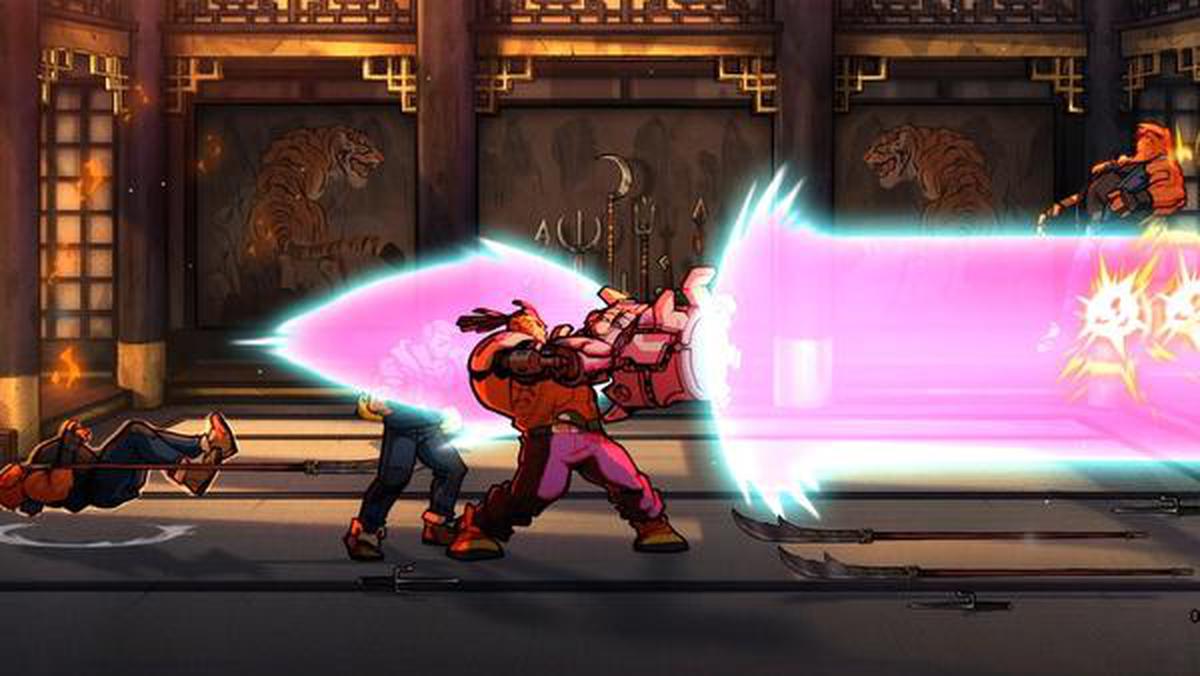 Screenshot of a fight scene in Streets Of Rage 4

Pixellated sprites may do classic games justice, but I am glad Streets of Rage 4 went with a hand-drawn art style with excellent animations — similar to Street Fighter Alpha’s art style — lending to the richly-designed stages packed with ambience. If you miss that 16-bit aesthetic, you can break hidden arcade machines with a taser to unlock and play a retro level with memorable fights from the previous games. Completing the Streets of Rage experience is the 90s electronics that somehow just works, offering rhythm to the gameplay and the player’s adrenaline. Even the audio of punches and one-liners has an echo-like effect that tries to emulate the games of that era.

If you thirst for the fight that only a beat-em-up can give you, then Streets of Rage 4 is right up your alley. Whether you want a taste of the good old days, or if you want something new and different, the game has plenty of action and replay value, just make sure that you have friends along, watching your back.