Actress Sonam Kapoor Ahuja is currently in Delhi with her husband Anand Ahuja as they self quarantined after returning from London. Since then, both of them have been sharing their posts on social media.

Recently, Sonam turned into a hairstylist for Anand, and they even shared a few adorable videos on social media. In no time, their video went on viral on the internet where Sonam was also seen giving a sweet kiss on Anand’s cheek.

Meanwhile, Sonam also shared a post on her Instagram story which is literally all of us during the lockdown. She took to her Instagram and shared a GIF from his film ‘Aisha’ where she can be seen shopping and swiping her credit card. But what’s relatable is her caption. The post reads, “Me: spending all my money on chaat after lockdown.”She captioned it as, “Pani Puri, I am coming for you!” check out her post below: 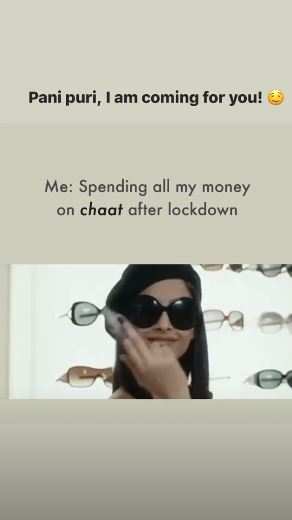 On the professional front, Sonam was last seen in the film ‘The Zoya Factor’. Reportedly, it is being said that her sister Rhea Kapoor is planning to make the sequel to her 2018 hit film, ‘Veere Di Wedding’. Rhea, who produced ‘Veere Di Wedding’ in the past, is reportedly working on its second part. Kareena Kapoor Khan, who was the part of the film, confirmed the news earlier. Speaking about the same, Kareena reportedly said that Rhea is planning it.