On the 20th anniversary of Mani Ratnam’s Alaipayuthey on Tuesday (April 14th), the filmmaker surprised fans with a first-ever live interaction online on his wife, actor Suhasini’s Instagram account.

Much to the delight of Tamil movie-lovers across the globe who were already celebrating two decades of the iconic romance starring Madhavan and Shalini, Ratnam took the time out to answer a series of video questions sent in by fans, as well as have an Alaipayuthey reunion with Madhavan who did a collab-Live with him from the latter’s Instagram account.

“You’re not a very social person and don’t go out too much, but how are you able to still gather the idea of personal relationships between people, make them intimate, and portray their stories as a writer?” asked Madhavan, after congratulating Ratnam on two decades of their first film together.

Mani smiled, “It’s enough to exist in this world and observe and interact: Aren’t our relationships and emotions relevant at any given point in time? The basic idea around them hasn’t changed. What we feel now in 2020 was felt many years ago as well. It’s easy to identity that emotion.”

He added to the answer during a later question from a fan, saying, “I don’t think my films depict the purest form of love or anything like that; if you see in Kaatru Veliyidai, it was quite a difficult relationship between the two leads to portray. There is no definition of a perfect relationship — and that’s exactly what keeps me interested in learning and trying to represent that on screen. The dynamics keep changing, and the trick is to balance them perfectly. It could be between a man and a woman, a parent and child, or siblings even.” There was time for some banter between the duo as well, as Madhavan revealed that he had only introduced Mani Ratnam to golf during the shooting of Aayitha Ezhuthu: “Sir asked me why I was playing an old man’s game, and then he proceeded to play with me and beat the crap out of me!”

He also recalled that during Alaipayuthey, Ratnam wanted him to be much more than just an actor: “You wanted me to dabble in everything, be an AD, manage the crowd… I wondered then why you made me do all that, but now I understand cinema so much more. Thank you for completely changing my life.”

Sushaini piped in adding that Ratnam doesn’t take such special interest in all his actors, “Maddy, that was just for you,” to a beaming Madhavan.

The actor had one more question for the filmmaker: “Your dialogues become iconic, but they are all mostly single lines. In Nayakan, there was, “Neenga nallavara, kettavara?” But in Alaipayuthey, the dialogue from Karthik to Shakthi, “Naan unna virumbala….” was six lines long! How did you write that, and did you cringe when it was being shot? It seems so unlike you.” 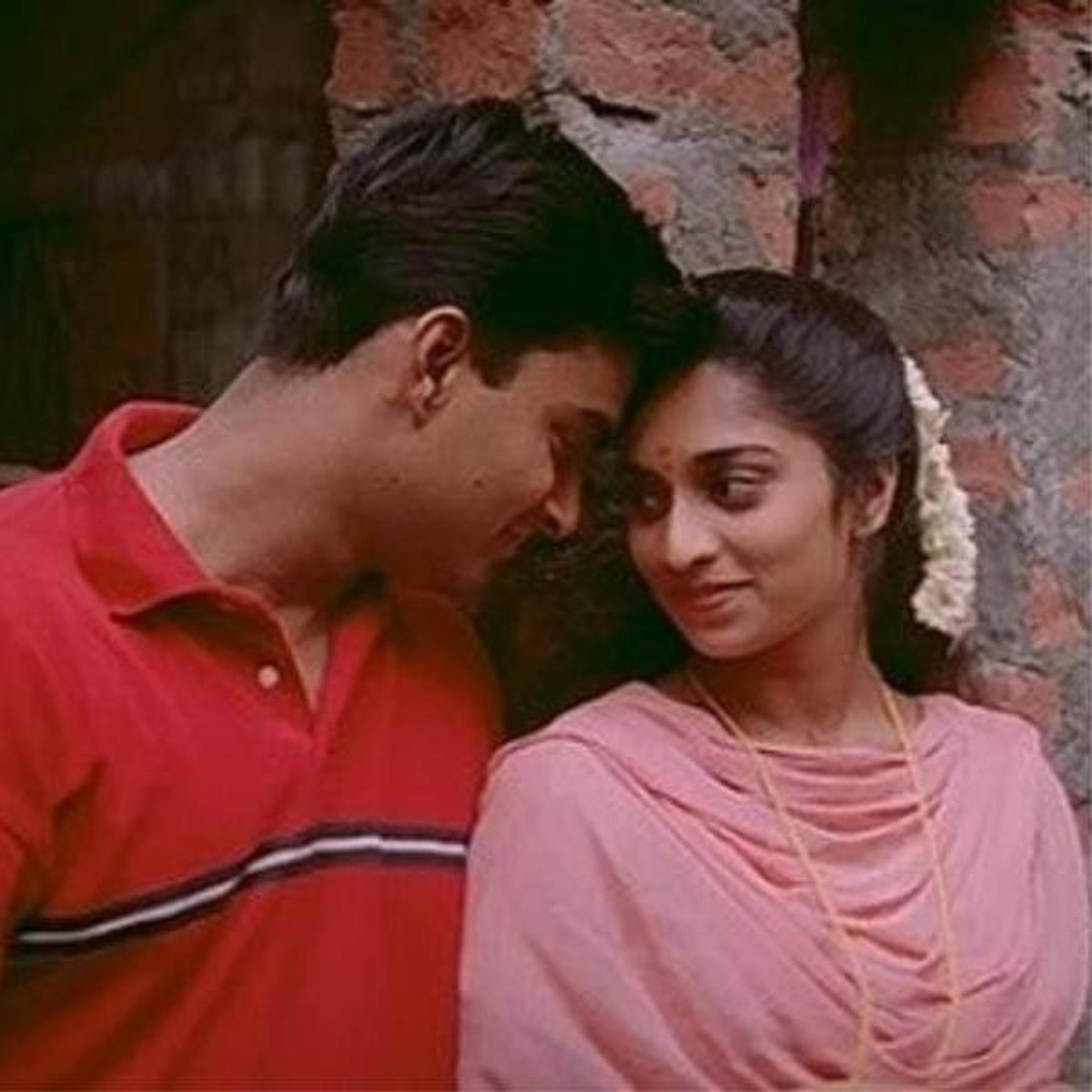 Ratnam smiled and responded, “You should see the dialogues in Iruvar then. Honestly, my only concern then was that we had those two trains just for a couple of hours and I wanted us to finish the shot soon.”

After Madhavan, others like Khushbu Sundar (who acted in Alaipayuthey), Aditi Rao Hydari, Anu Haasan and Bollywood actor Poonam Dhillon also came on the live chat to ask the director a few questions.

Filmmaker Gautham Menon also popped up on the comments, saying, “Amidst this crisis scenario and hoping for normalcy very soon and wishing people the best, today is bright because of your appearance online sir. Lovely to hear you talk. Inspiring enough.”

Ratnam on social responsibility, OTT platforms and casting in his films

One of the early questions from fans was aimed at directors tackling social responsibility in their movies, something Mani Ratnam is considered a pioneer of, considering the many themes he’s represented. However, Ratnam replied saying that while most filmmakers have that in their conscience, the concept is “overrated”. “Films don’t necessarily influence a person completely; it’s a combination of several factors which determine how someone behaves,” he added.

Ratnam, who reiterated a few times that he was trying to stay ‘zen’ during the lockdown, also indicated that a move to OTT platforms could never materialise for him. Answer a question on making a film for streaming sites, he replied, “If you ask a tennis player who’s been in the sport for 20 years to suddenly go play football, can he do it? I know how to make only movies correctly.”

A shout-out to Lijo Jose Pellissery

The CCV filmmaker then answered a couple of technical questions on the colour palette in his films, and how every movie needs a combination of a good script as well as actors and technicians to elevate it to the next level. He then moved on to discuss how he chooses his cast.

“I’m usually looking for someone giving me the least trouble. (Laughs) But honestly if my first choice doesn’t work out, sometimes it could be for the better. I’m not looking for actors who do exactly what I say; I want them to find another interpretation of the role, he or she needs to put something from their personality into the character: that synergy is very important.”

What is he working on currently?

On the work front, Ratnam said that he’s writing a script under lockdown (“but it’s been difficult to concentrate”), and that after Ponniyin Selvan 1 and 2, there was a possibility that he could make a film in Hindi, when asked. “However it has to happen organically, just like me making another socio-political film or me directing Suhasini. If it happens, it happens!”

On motifs in his films and storytelling through the camera

Ratnam laughed away the suggestion from a fan that he invented the motif of trains to represent emotions in his films. “Haha, it’s been used for many years. One of the earliest moving pictures was in fact of a train coming into a station.”

There are several masters who have used the camera to convey emotions — Satyajit Ray, Guru Dutt, Sridhar — to mention a few, Ratnam said, adding that he’s just following in their wake. “But when I choose a cinematographer, I’m looking for someone who’s not just capturing scenes, but interested in telling a story with me. He’s the one I really depend on during the filming of a movie.”

Does anything scare him as a filmmaker?

“I’ve never cried during the filming of a movie, but I’ve been scared. Scared when I work with children, because they really move away from acting and live in the moment during a scene. What happens after the film is done? They have experienced a sense of trauma in their character. I’ve always been worried what happens to them the next day.”

Vignettes from the shooting of ‘Nayakan’

“By the time Kamal came on the sets of Nayakan, he was a veteran and had done so many impressive films. I still remember we had to shoot three back to back intense scenes: a father losing his son, him carrying the body to cremation, and then dealing with his daughter losing him. I narrated the scenes to him; Kamal came to my room after sometime having internalised the shots and then cried his heart out in front of me — exactly the way he did it in the movie.” 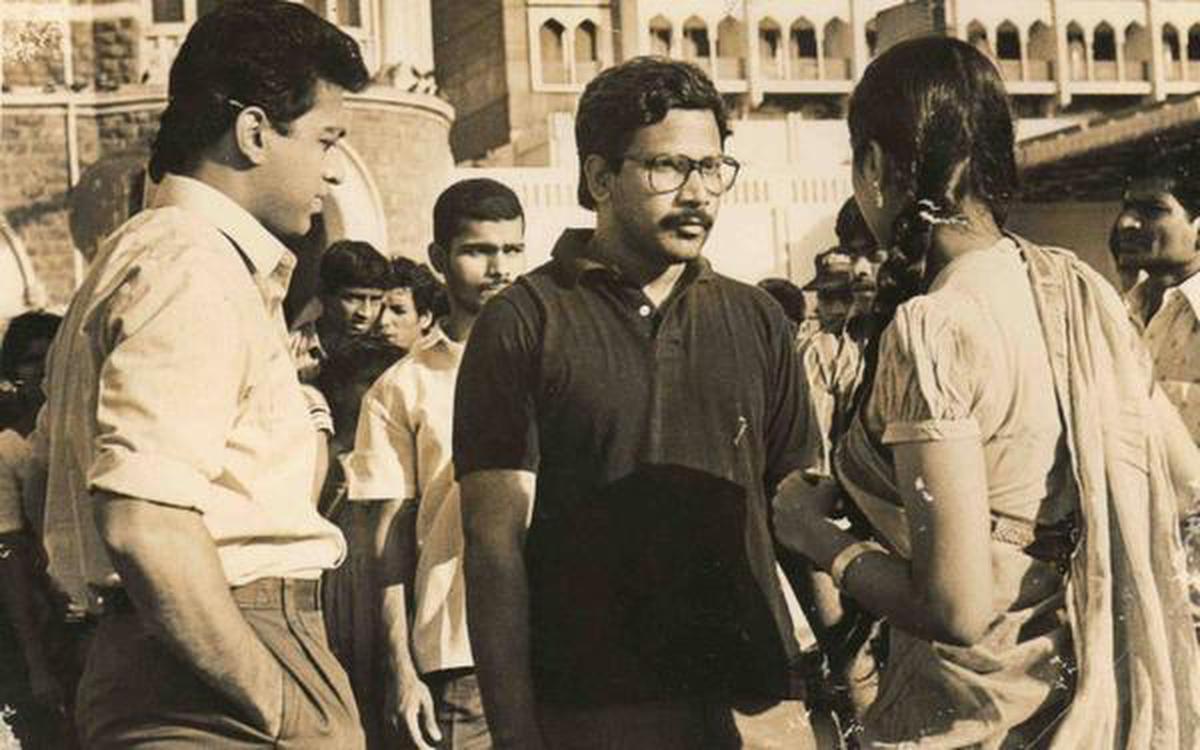 Mani Ratnam and Kamal Haasan on the sets of ‘Nayakan’

There was one more revelation from Ratnam on Nayakan, when Madhavan had earlier asked him if he spent time with a real-life don before the film, to design Kamal’s role so effectively.

“I had an assistant director who had an association with Varadarajan Mudaliar and told me about many of hs attributes, like how he would only wear white, how he’d ignore the sofa and sit only on the floor; you just need to get a sense of behavioural traits like that, nuggets of information, and build it up to project it into a character.” What would Ratnam ask God if he got the chance? “Okay let me be honest. Looking at the world around us, where have you been all this time? Are you hiding?” he replied to a fan question.

At the end of the Live, crediting the incredible work done by doctors in fighting the coronavirus our break, Ratnam said he’s being patient, attentive and hoping that tomorrow will be a better day. “I’m amazed at their profession, how selfless they are and the risks they take to keep us safe. They are the warriors in this battle and I’m in awe of them.”