Rishi Kapoor was passionate about three things: acting, food and people. He treat all these with warmth and humour. When it came to acting, he was so passionate. He did say to me, many others and the media that Do Dooni Chaar (2010) had liberated him, and then after that, he was game for more challenges. He then did Aurangzeb (2013) and D-Day (2013), and he had never done these negative characters. He made them human, they were not two-dimensional villains.

With Do Dooni Chaar, I was doing my first film, the DoP had done two-three films before that, the production designer was doing his first film, costume designers were some two-three films old. Neetu Sigh always claimed this her first film because she said, “I’m a newcomer”. But he never ever — even though he had himself directed a film, Aa Abh Laut Chalen (1999) — made anybody feel like we were all doing this for the first time. He became a partner in the process. He had no problem saying these characters are new for me, and I will leave it up to you. What he found universal were the emotions, particularly the relationship of his character, Duggal, with his sister. He found the same kind of relationship with his younger sister. He loved challenges, which is why when he learnt he had cancer, he faced it with so much grace. For me Irrfan and Rishi Kapoor, it’s so much about grace and they are warm personalities to be celebrated.

We shot Do Dooni Chaar (2010) in 2009 but I pitched it to him in 2008, and it was early days for these kind of films, which were real stories but made with a grammar that would be accessible to a wider audience. I’m lucky that I got to work with him and Neetu Singh in my first film because they both took away the fear and awe of working with stars, and the only fear left was of making a film, which is an exciting thing. Of course, his passion for food. Every day, when we used to shoot in the mohallas and neighbourhood, and by the time we would be setting out, he would be friends with locals, families and by lunch time there were would amazing food, especially in winter, and there would be some Mrs Kakar or Mr Behl or somebody coming with food for him. He would come and whisper to me, “Aaj Kashmiri hoga, lunch ka intizaam ho gaya hai, aaj chole honge”, and one Kashmiri family that he befriended had done an entire feast for him. 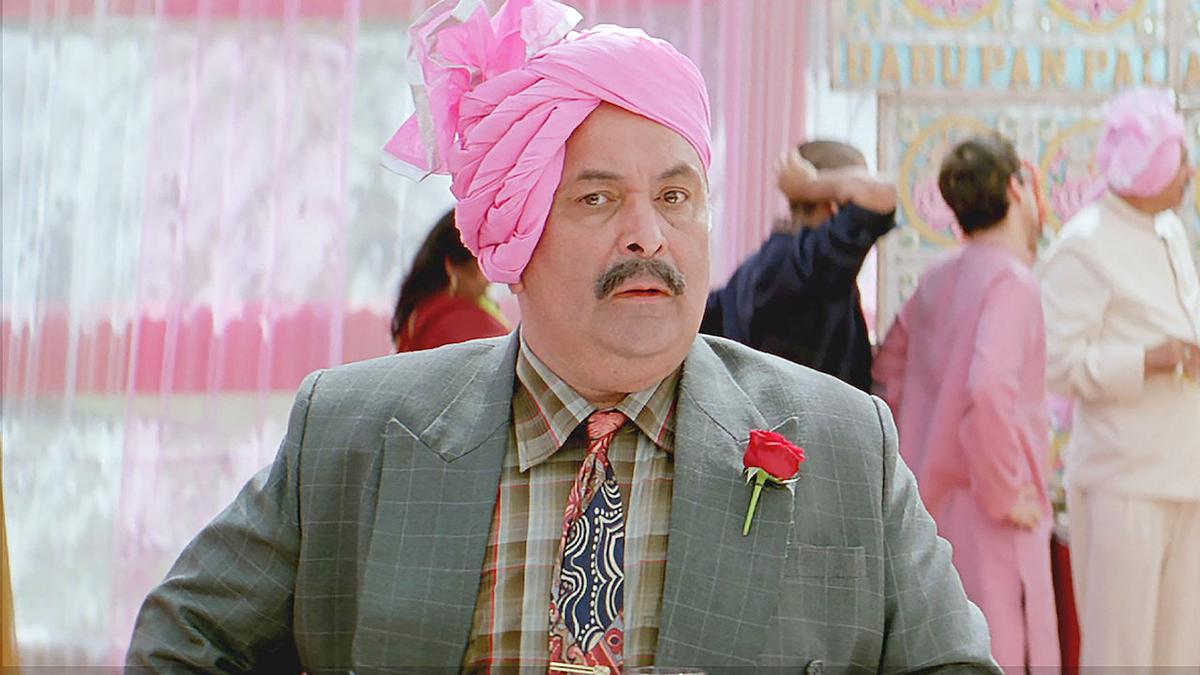 He fell in love with his character of Duggal. He loved dubbing. Now films are made in sync sound but we were a small budget team and sync sound in 2009 required extra expenses. I know from friends that even after that, when he acted in films he would just not wear the lapel mic, because he loved the process of dubbing and he would add so much to it. He used to come to see what was edited and when the whole thing was done, I remember he said, “I’ll miss this Duggal guy”. He badly wanted a sequel to this film but the logistics were such that we couldn’t. When he was in States, where he was being treated, I would message him to find out how he is doing and he would say, I’ll be fine soon. I’ll be coming back, you finish the script I am dying to do it and we’ll make a sequel.

He completely surrendered and was willing do anything during Do Dooni Chaar. He would take these kids, who were teenagers, as pillions on the scooter, and do these chase sequences and riding in the corridor of Connaught Place. Some shots were done by a stunt double but most of it he did himself. He hated shooting at night. He fell so much in love with the character that he even shot at nights. There are sequences where he took kids out at night to eat parathas, and of course, the number of parathas he ate. I wish we could have done the sequel, or maybe it is good this way.

He was a generation older than me and a good friend. We did Patiala Houseand D-Day and we really hit it off. He was excited that he was getting the kind of roles because at the time there weren’t roles being written for actor like him. For me, it was just being able to sit with him and have long conversations. We were almost neighbours in Bandra, and we would meet very evening to chat and have long sessions about films, cricket and current scenarios. We’d have a drink once in a while too. He was brutally honest and opinionated and he had wonderful things to say. He was also quite blunt about was happening and maybe a film that had released. We were close, more than a director and actor. Like I said, he was a generation older than me and it seemed odd that we got along so well and spoke so freely about things. He would call me up if saw a film of mine and let me know if he liked it or thought it was absolute rubbish. We were pretty honest with each other and I think I would call it a unique friendship

I am the only director who has worked with both Irrfan Khan and Rishi Kapoor and they come from such different schools of thought. Rishi was the quintessential brat of the industry and he was chintu baba. Irrfan came from a totally non-film background and struggled and reached where he was today. When we were doing D-Day, Rishi himself couldn’t think he could pull off such a role. When I told Irrfan, he said ‘Are you mad? [Rishi Kapoor] is a lover boy; the king of romance’. Rishi even told Irrfan to tell me not to cast [Rishi] in the role. Rishi had heard a lot about Irrfan and how he does serious films. Rishi prided himself on being a star and only later on did he understand that he was also a wonderful actor. People look up to his performances in some of the films that weren’t star vehicles. During the shoot, Irrfan is someone who wouldn’t stick to lines and let’s the performance take him where he wants to reach. Whereas Rishi having worked with stalwarts like Yash Chopra thought that lines are very important and he’d keep telling Irrfan, ‘Arre line to bol!’. But when Rishi saw the rushes and saw what Irrfan brought to the role, he was mesmerised.

D-Day will be a cherished memory for the rest of my life. That I could take Rishi Kapoor to take the role or make Irrfan my main lead. I was not suddenly answerable to powers that be or studios. Everyone thought my own career was over at the time and today what seems like inspired casting was extremely risky at the time. To do that particular espionage film which kicked off others like it, and to do it in that particular way; it has always been the turning point of my career and I have cherished it. It’s ironic that something that has given me so much good is also something that I will remember for two very important people missing from my life.

He was the oldest person on set but the youngest in heart. It was the biggest pleasure for me when he agreed to do Shuddh Desi Romance (2013), and I was a fan boy throughout the shoot. He has been the best, and was known for his work, passion and craft, and it was inspiring because we were a young crew and cast, yet he was the most jovial and most excited one. Having 40 years of experience, you always feel there is so much to learn from an actor like him. One thing which was exciting for me personally that we were shooting on a digital medium and there were always arguments about that. He used to say, “You guys got it easy, and there used to be a lot more commitment to the shot, and now you guys take it lightly.” His concern was not about technology but commitment to the shot and scene. With so much childlike energy and passion, he was a pandora box of stories. As a film buff he was a treasure box of stories for me. His going away is the end of an era.

I met him for the first time at BBC in Mariott, in the year 2003; it was a very brief meeting and I asked him why we don’t see more of him on screen. “Where are the roles?,” he asked. Roles came his way once again. He managed to reinvent himself. As I got to know him better, his generosity became more evident. It was strange, it’s not as if he got you gifts or anything. But he was generous with his warmth- he had a tremendous amount of it. And he would give everyone he met a little bit of it. Even when he was fighting with his directors, there was never any bitterness in it. After pack up, all would be forgotten, at least from his side. There were no masks with him. No underplaying of emotions, whatever he felt, you could see it. He had a shy smile of a school boy, who had made people laugh. That is how I’d like to remember him: a gentle giant with a shy smile.

The sets of Bobby and a bored child, me, underfoot. Come to the rescue babysitter, entertainer, charmer and procurer of orange ice lollies, Rishi Kapoor. For me, it was love at first bite. And I have loved him ever since. My favourite hero was also, years later, my real hero. A five-star hotel lobby and a molester trying it on saw the full, protective wrath of Rishi Kapoor.

There are so many stories, and I am grateful for them all. Most of all that he played, to perfection the role in Fanaa that I had specifically written for him. And best of all, the call I received from him after he watched My Name is Khanin the theatres. He stood up at the end and had given a standing ovation, he said. What made him swell with pride was the writing had made an old, battle horse like him forget he was in a movie and it was all make believe. That compliment, from a man notoriously averse to giving them, is what I will save in my heart forever. Right there with the orange ice lolly.

As told to Namrata Joshi, Kennith Rosario and Deborah Cornelious