YouTube, Tiktok and social media stars from Kerala upload hilarious videos shot at their homes during the lockdown to slow the spread of COVID-19. Garnished with liberal doses of humour, these short films are click bait for netizens who can relate to the situational humour in the narrative.

Kaarthik Shankar on his YouTube and Facebook pages (both named Kaarthik Shankar), portrays what happens when he tries to follow his mother’s instructions to cut and clean vegetables for a simple curry. His mother, Kaladevi makes her debut as his on-screen mother and MS Raja is his valiyachan (father’s elder brother). Kaarthik’s father, Nooranad Jayan, a photographer, operated the camera. “When some of my friends told me how little they knew about cooking, I got the idea for the first video. When people started asking me about a second part, I posted another and three videos have come out so far,” says Kaarthik, a resident of Adoor in Pathanamthitta district. While the first video got 1.3 million views, the second has 2.5 million views and counting. A sound engineer and short filmmaker, he has worked as an assistant in films. The 29-year-old is now working on his first film project. Ammamma, a.k.a 86-year-old Mary Joseph Mambilly, and her 28-year-old grandson, Jinson Mambilly, are social media stars with 6.2lakh followers on TikTok and over three lakh followers on Facebook. Their social media page is titled, ‘Ammammayude Kochumon’. Mary was felicitated by YouTube with the “silver play button” on getting one lakh subscribers. Also, she has acted in three upcoming films, of which one is in Telugu.

“We have posted four videos related to the lockdown. While the first one was based on a scene from Malayalam movie In Harihar Nagar, in the others ammamma explains the need to wear a mask, wash your hands and stay at home. There is humour but it is all delivered in her typical no-nonsense, simple style,” says Jinson. He began making videos in 2018 when he was home on a break from his job in Qatar. “My stay got extended because of the floods and that’s when I started making videos. Ammamma, my paternal grandmother, became part of it gradually and all our videos went viral,” says 28-year-old Jinson, who works as a safety officer.

Most of the videos have been shot at the rented house they used to stay in North Paravur, Ernakulam district. Jinson’s younger brother, Lekson, and cousin Jomon also feature in the videos. Now that the lockdown has been extended they plan to shoot more videos. “I want to do something on non-resident Malayalis. Many people find fault with them for the spread of the disease. Being an expat myself, I know the difficulties they are going through,” says Jinson. 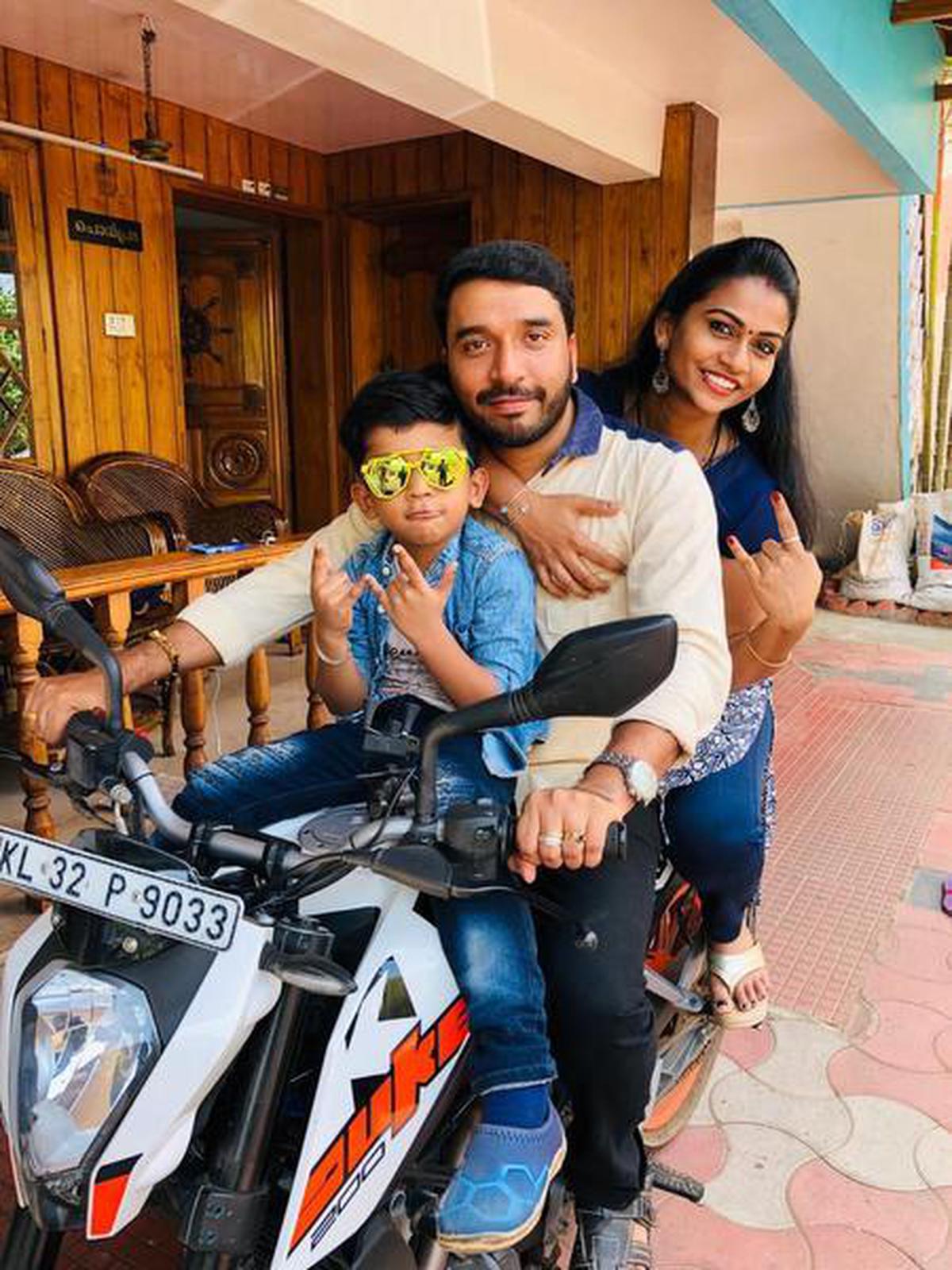 Among the COVID-19 lockdown videos posted on the Facebook page of Motor Vehicles Department Kerala is a video by Anuraj Rajanand his wife, Preena Anuraj. The fan-base of the couple, based in Adoor, Pathanamthitta district, is so huge that that they were approached by the Department to make a video. It highlights the guidelines for private vehicles during the lockdown period and the consequences of flouting the rules.

Besides capsules highlighting precautions to be observed and guidelines to be followed, all related to the pandemic, they have released a set of videos, called ‘Lockdown in Adoor’ with one of them featuring misadventures of Anuraj’s character, Sujith, when he goes out for shopping.

Anuraj says that since the cast and crew in the videos stay close-by it is not difficult to shoot. “Also, I have taken special permission from the police department to bring down one of the actors, Sanju Madhu, for the shoot,” he says. Their six-year-old son, Rishi Anuraj, also feature in some videos. They’ve crossed one million followers separately on TikTok and run a channel, IM4U. “We didn’t want to be idle during the lockdown. Also since we earn from these videos, we’ve decided to hand over the money to the government for COVID-related relief measures,” Anuraj says. 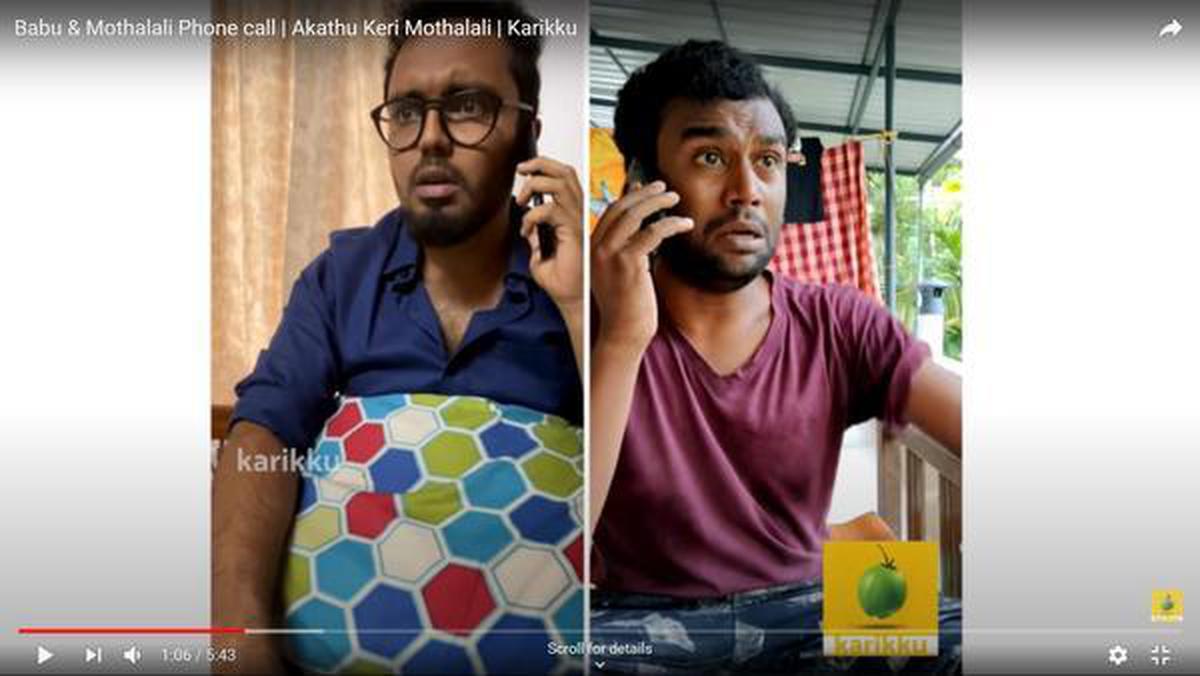 ‘Apologies for the low quality of the video. This was shot on mobile phones’, goes the message on the latest video of Karikku. Nikhil Prasad, creative head of the viral YouTube channel, says, “It was shot during the lockdown period by the actors from their homes. While Anu K Aniyan as Babu, a ‘guest labourer’, is in Kayamkulam and Arjun Ratan (as his Muthalali’ or the employer] stays in Ernakulam. I edited it from my studio.” In the video the employer is advising Babu about precautions to be taken during the lockdown.

Nikhil adds: “There have been several ‘Break the chain’ videos and lockdown-related clippings posted by celebrities. Since all of them are on a serious note their reach might be restricted. Humour is the best way to reach out to people.” The video of Babu alone has got over 4.5 million views. Nikhil is currently busy with post production of two of Karikku’s ongoing series. Singer Vidhu Prathap and his dancer-anchor wife, Deepthi Vidhu Prathap, has been posting comic videos and capsules shot at their home in Thiruvananthapuram. Their recent work, ‘Lockdown planning’, has gone viral with over 2.5 million views. In the video, they set down an idealistic timetable to make the best use of lockdown, which never gets beyond the planning stage.

They made the first video when the janata curfew was announced on March 22. “That was meant to be a one-off thing because we wanted to look at the scenario in a light-hearted way. So we shot our cooking session, making ullivada (onion fritters). Although we had no plans to upload it we had so much fun together that we posted it. The response was encouraging and when the lockdown was announced we decided to do more videos,” says Deepthi.

Vidhu says that even though they enjoyed making TikTok videos they weren’t regular due to time constraints. “But now there is so much time on our hands. It is a joint effort since we have similar interests and tastes,” he adds.