The film that broke this pattern was Chandramukhi, which released 15 years ago on April 14. What it did not succeed in breaking was how the film still ended up being completely about Rajinikanth.

More on that later but here is more trivia. Of the big stars in Tamil cinema, only Rajinikanth and Suriya have starred in a supernatural/psychological horror-thriller film in the new millennium. Only one of them tasted success.

By now, most people ought to be aware of the fact that Chandramukhi was not an original idea. The plot is drawn from Madhu Muttom’s story, which director Fazil turned into a blockbuster film, Manichitrathazhu, in Malayalam in the year 1993.

P Vasu, who had been struggling to deliver a hit since Malabar Police in 1999, wrote a screenplay based on Manichitrathazhu and cast Kannada cinema’s ‘Sahasa simha’, the late Vishnuvardhan, in a film called Aptha Mitraa (2004); tragically, the last film of actor Soundarya who was killed in a plane crash a few months prior to the film’s release in August. 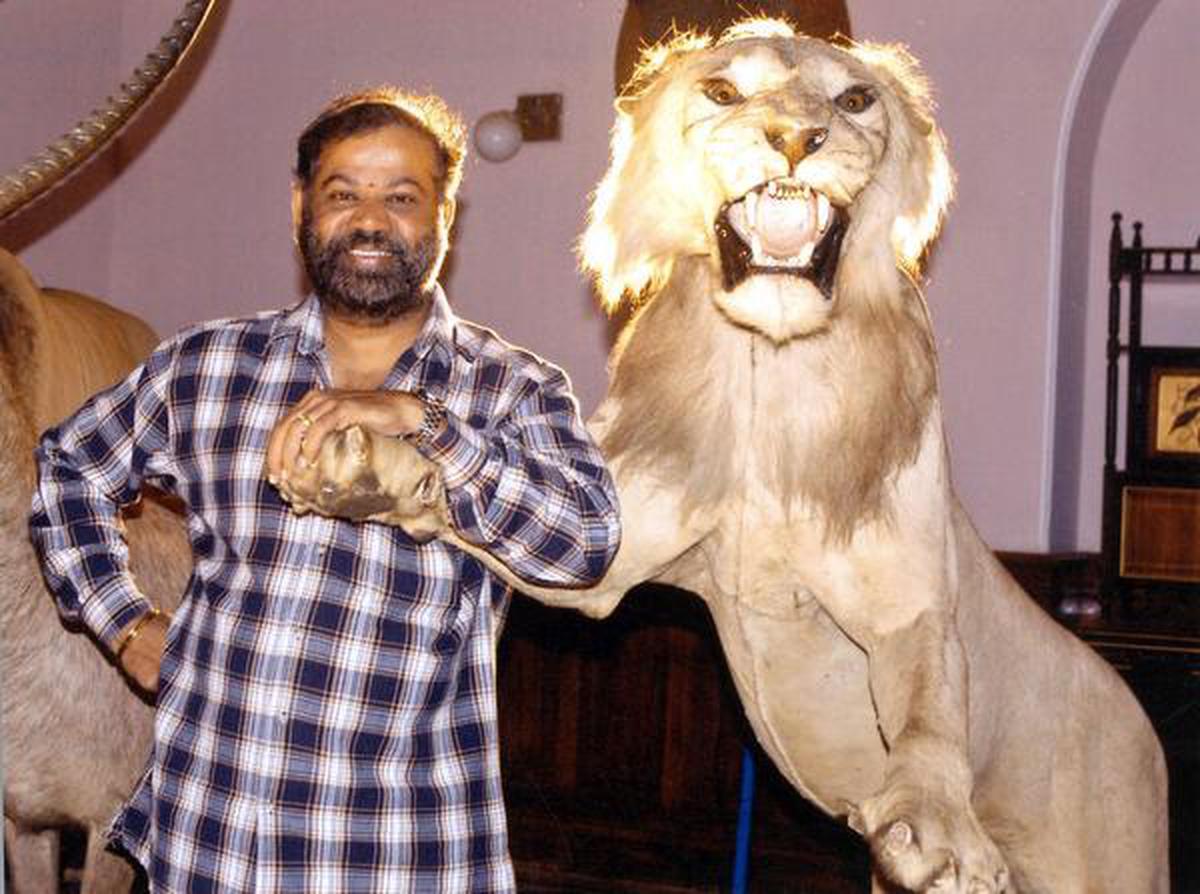 The film was a runaway success, and Rajinikanth, who had been looking to revive his fortunes in Tamil cinema following the monumental debacle that was Baba (2002), called on Vasu to remake Aptha Mitraa in Tamil. The rest, as they say, is history.

Chandramukhi was a massive financial success and revived fortunes for the producer, Sivaji Productions, as well as Rajinikanth, who went on to command the second-highest fee for an actor in Asia with his next film Sivaji (2007).

Here is another trivia. Chandramukhi was also the first remake which won the Tamil Nadu State award for the best film; it split honours with Ghajini.

Today, the Rajinikanth film would make the ‘comfortable watch’ lists of anyone enduring lockdown stress, and we list five reasons why.

But before that, there is space for one last trivia: Vinaya Prasad, who played Mohanlal’s love interest in Manichitrathazhu (as Sreedevi, the character wrongfully accused of mental illness) plays Nasser’s wife in Chandramukhi with Nayanthara reprising her character from the original.

Chandramukhi was a genre-defining film in Tamil cinema. The idea to infuse comedy (going beyond the situational humour Manichitrathazhu employed) into a horror/supernatural subject also worked like a charm. There have been over two dozen horror comedies in Tamil cinema in the last 15 years; most attribute the emergence of this genre to the success of the Muni/Kanchana series of films by Raghava Lawrence. It would not be a stretch to suggest that Lawrence was inspired because of the success of Chandramukhi. Coincidentally, the actor will be playing the lead role in Chandramukhi’s sequel to be directed by P Vasu.

Manichitrathazhu means an ornate lock. Aptha Mitraa means dear/close friend. A ‘want’ was created to emphasise the importance of the titles in these two films.

Chandramukhi was different; the title is the supernatural character’s name but the film’s emphasis was on deifying Rajinikanth, Tamil cinema’s biggest cult of personality figure. The film brought out the actor’s image unscathed amid a period of doubt after the failure of Baba. 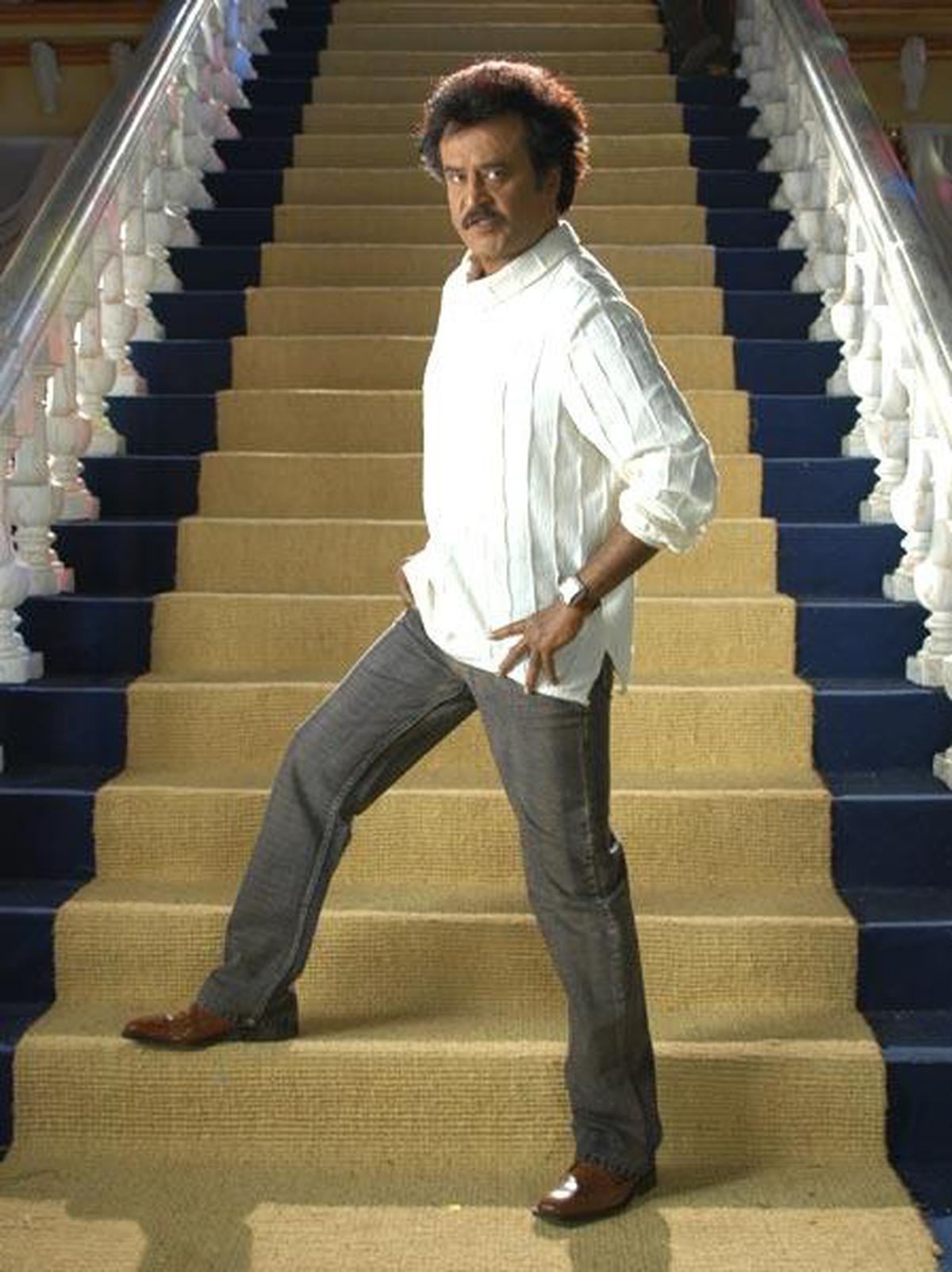 Whereas Mohanlal (in Manichitrathazhu) appears an hour into the film’s runtime, both Rajini and Vishnuvardhan make a grandstand inside the first five minutes. But only Chandramukhi spends the first 25 minutes of its run time to establish Rajinikanth’s cult with an intro song littered with ‘social messages’ (a recurring aspect in Rajini films that declined following Sivaji but re-emerged in Petta). In fact, all songs in Chandramukhi exalt Rajini (including the romantic song with Nayanthara, which does not feature in Aptha Mitraa).

There were also two pointless fight sequences: one with Thalapathy Dinesh’s unit of stuntmen and the other with Sonu Sood (why was he even there?). The purpose of adding Sheela’s Akilandeswari character to the plot remains unclear.

Despite these flaws, it was Rajinikanth’s eccentricity that added colour to this masala horror film. Case in point: Vettaiyan Raja (remember laka laka laka?), the psychiatrist Saravanan’s ability to read the words out of people’s minds or Rajinikanth’s run-ins with Nasser and Vadivelu. The fact that these changes had to be made to fit a larger-than-life star into a horror subject so as to make it fit for mass viewing points to the consumption preference and maturity of the audience. 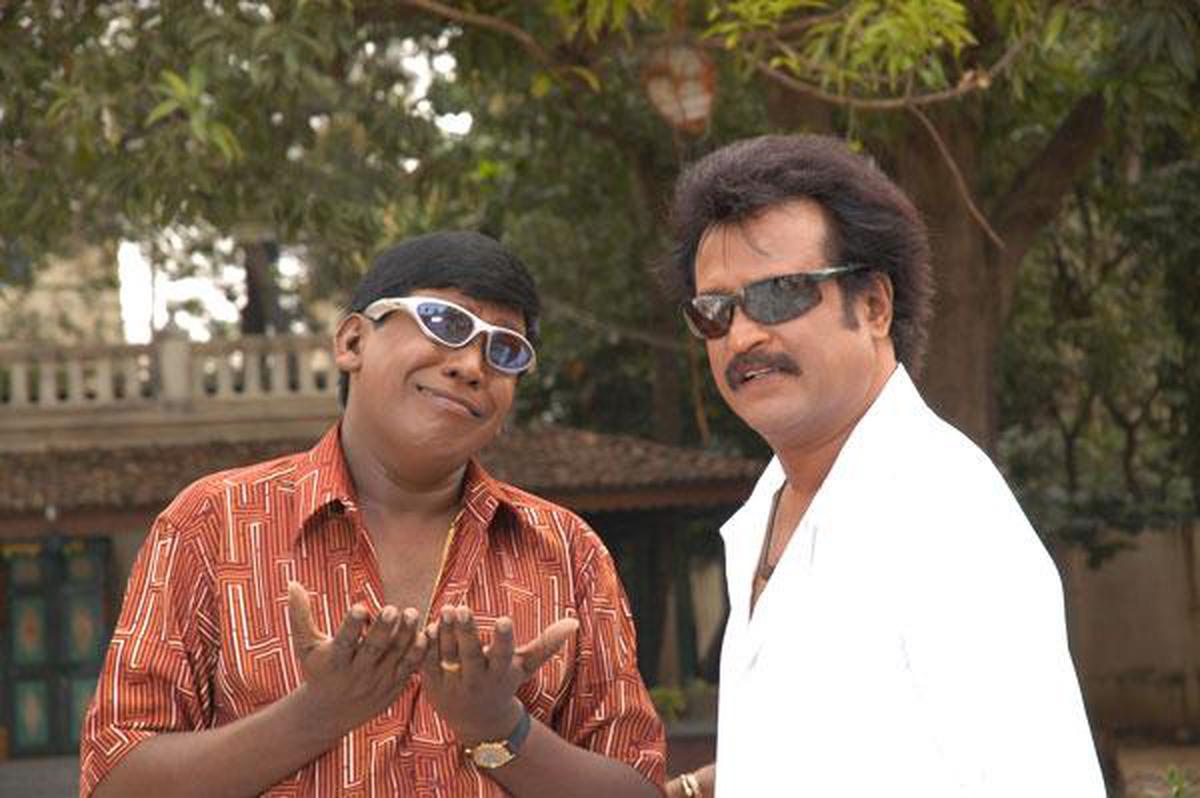 Albeit inadvertently, Prabhu (who played Rajini’s friend Senthilnathan) delivered the most iconic line in the film. While the dialogue was mouthed by an emotionally miserable character, “Enna kodumai Saravanan” was turned on its head by Premgi Amaren in the cult hit film Chennai – 600028 for comic relief.

There are two other aspects that unite the three films: the first is the painter. Gopal-u (in Chandramukhi), Gopala (in Aptha Mitraa) and Raghava/o (in Manichitrathazhu). We don’t see him at all in Malayalam and Tamil but Aptha Mitraa reveals a face to this name. Turns out, he was just on a break! The second is the great American psychiatrist Brad Lee (or is it Bradley?). Whoever he is, he redefined Indian horror films for generations to come…

Jyotika’s portrayal of Chandramukhi makes for an interesting watch. The actor did put her heart and soul into learning the dance steps for the ‘Ra Ra’ song, but Chandramukhi goes overboard in the portrayal of mental illness as someone who is unhinged. 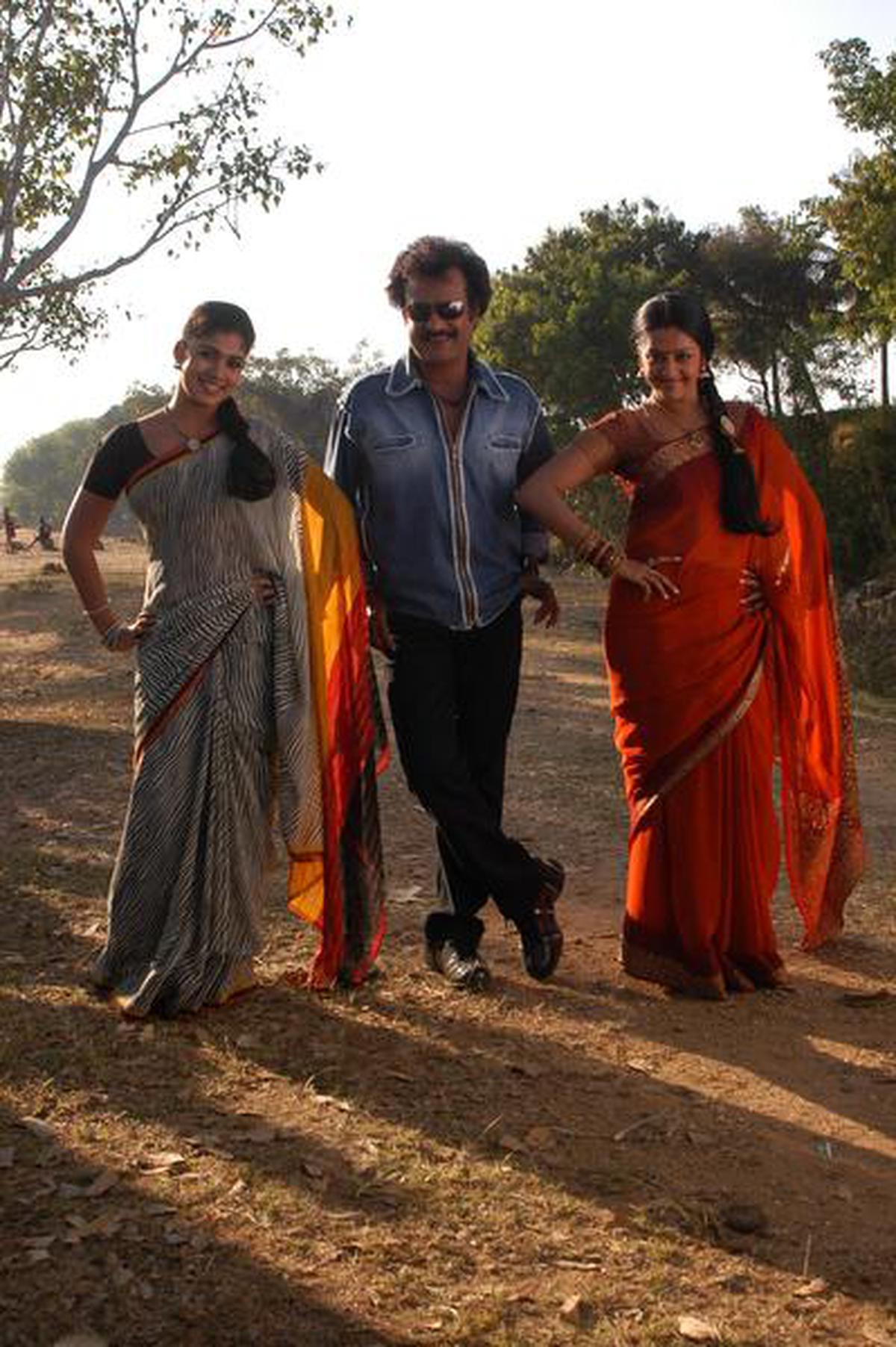 Rajinikanth with Nayanthara and Jyotika in the movie ‘Chandramukhi’.

In Manichitrathazhu, Fazil stops well short of heightening the supernatural tendencies of Shobana’s character beyond the iconic bed scene. But neither spirit could break open a door that is locked from the outside, which was a natural born tendency, and one of the first abilities on the CV of ghosts/demons that followed in both Malayalam and Tamil cinema in the later years.

However, Shobana’s Nagavalli and KS Chitra’s ‘Oru Murai Vanthu Paarthaya’ rank a few steps higher in the pecking order, though it was Chandramukhi, and not Nagavalli, which inspired the many parodies in Tamil and Telugu cinema following its release.

So memorable was the ‘Ra Ra song’ and the subsequent “Laka Laka Laka” by Rajini that director S Shankar saw it fit for use in a comedic capacity in Sivaji two years later, when Rajinikanth courts Shriya Saran’s character.

Chandramukhi’s success rightfully inspired many films of the genre in Tamil cinema but its ripple effect spread to Telugu and Kannada film industries as well as Bollywood.

Priyadarshan, who alongside Sibi Malayil and the Siddique-Lal duo served as II-unit director in Manichitrathazhu, decided to remake Fazil’s film as Bhool Bhulaiyaa (2007) in Hindi with Akshay Kumar in the lead. P Vasu then opted to direct a sequel to Aptha Mitraa, titled Aptha Rakshaka (which was Vishnuvardhan’s last film prior to his death), and made a standalone sequel to Chandramukhi in Telugu titled Nagavalli starring Venkatesh and Anushka Shetty. And the legacy is now set to continue into the new decade with Chandramukhi 2.